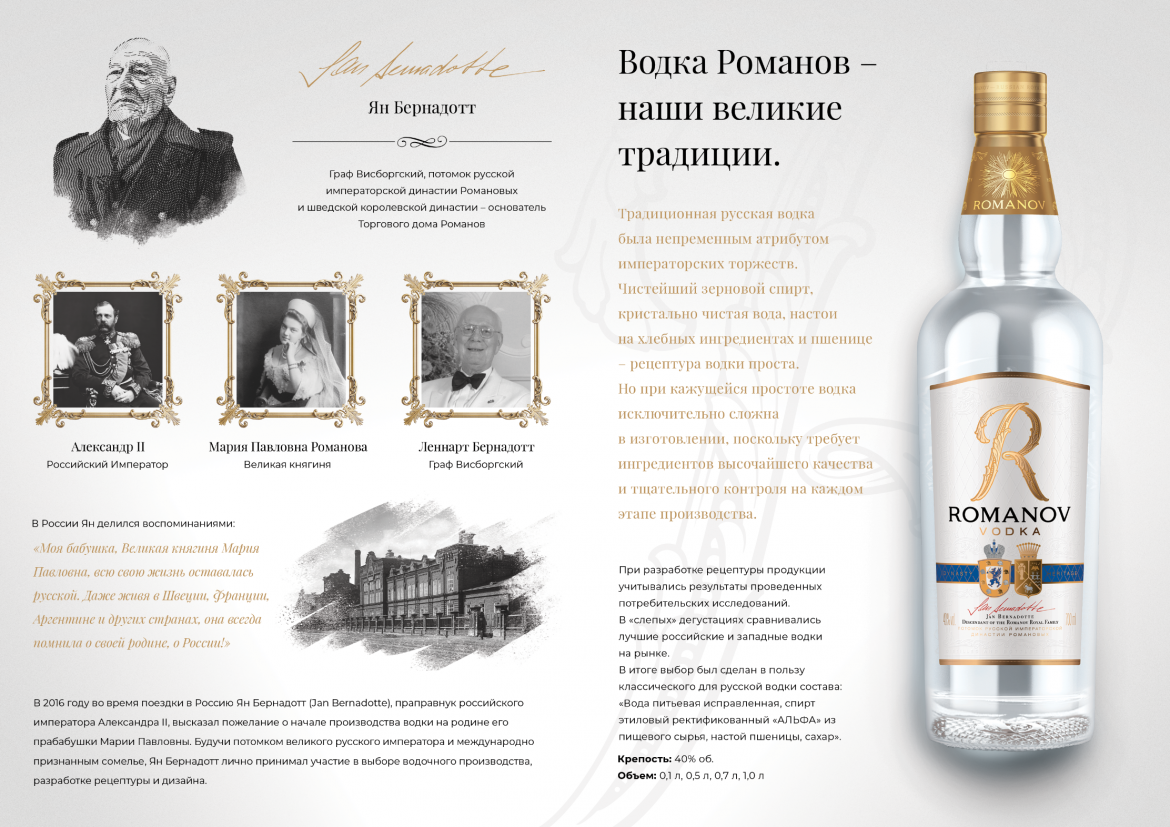 Traditional Russian vodka was an indispensable attribute of imperial celebrations. The purest grain alcohol, crystal clear water, infusions of bread ingredients and wheat – the recipe for vodka is simple. But despite the seeming simplicity, vodka requires exceptional attention in preparation, it is important to select the highest quality ingredients, to carry out control at every stage of production.

When developing the product formulation, the results of consumer research were taken into account. Blind tastings compared the best Russian and Western vodkas. As a result, the choice was made in favor of the classic composition for Russian vodka: “corrected drinking water, rectified ethyl alcohol alpha from food raw materials, wheat infusion, sugar.”
In 2016 during a trip to Russia. Jan Bernadotte, great-great-grandson of the Russian Emperor Alexander II, expressed a wish to start producing vodka in the homeland of his great-grandmother Maria Pavlovna. As a descendant of the great Russian emperor and an internationally recognized sommelier, Jan Bernadotte personally took part in the choice of vodka production, the development of recipes and design.

In Russia, Jan shared his memories:

“My grandmother, Grand Duchess Maria Pavlovna, remained Russian all her life. Even living in Sweden, France, Argentina and other countries, she always remembered her homeland, Russia!”

Today, Permalko has released the first batch of the brand in an updated design.

The new design of the ROMANOV brand is a sign of luxury and sophistication. The unique bottle is made in the imperial style with elements of modern design. The coat of arms of the Romanov dynasty occupies a worthy place on it.

The strength and power of the brand, the purity of lines and shapes, incredibly soft taste and aristocratic nobility.

Login as customer
We use cookies on our website to give you the most relevant experience by remembering your preferences and repeat visits. By clicking “Accept All”, you consent to the use of ALL the cookies. However, you may visit "Cookie Settings" to provide a controlled consent.
Cookie SettingsAccept All
Manage consent

This website uses cookies to improve your experience while you navigate through the website. Out of these, the cookies that are categorized as necessary are stored on your browser as they are essential for the working of basic functionalities of the website. We also use third-party cookies that help us analyze and understand how you use this website. These cookies will be stored in your browser only with your consent. You also have the option to opt-out of these cookies. But opting out of some of these cookies may affect your browsing experience.
Necessary Always Enabled
Necessary cookies are absolutely essential for the website to function properly. These cookies ensure basic functionalities and security features of the website, anonymously.
Functional
Functional cookies help to perform certain functionalities like sharing the content of the website on social media platforms, collect feedbacks, and other third-party features.
Performance
Performance cookies are used to understand and analyze the key performance indexes of the website which helps in delivering a better user experience for the visitors.
Analytics
Analytical cookies are used to understand how visitors interact with the website. These cookies help provide information on metrics the number of visitors, bounce rate, traffic source, etc.
Advertisement
Advertisement cookies are used to provide visitors with relevant ads and marketing campaigns. These cookies track visitors across websites and collect information to provide customized ads.
Others
Other uncategorized cookies are those that are being analyzed and have not been classified into a category as yet.
SAVE & ACCEPT